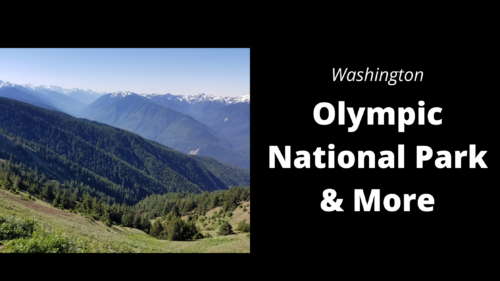 This part of my trip has been interesting, to say the least.

Not only were the last few days one of the hottest I’ve experienced in a while. While in Seattle, I had the privilege to be part of multiple record-setting hot days. By the time I made it to Olympic, it was still hot, but there was a small break in the heat.

But before we get to that, let’s talk about the few days I spent in Seattle.

My Mornings In a Parking Lot

I slept, yet again, at Walmart. It’s been a surprisingly good experience here. And this night was no different as I actually slept really well.

There is one thing about sleeping in parking lots. It’s tough to get ready. I still am not a fan of brushing my teeth in a parking lot, much less peeing in the one bush in a concrete jungle. So that is one thing you have to keep in mind unless you have an RV or van equipped with a bathroom and sink.

SIDE NOTE: I do have a bathroom I can set up, but it’s outdoor. I also made a sink out of half a gallon jug. It works well when I need it, but try not to use it (not the easiest thing to cleanout).

My solution to this issue (while sleeping in any parking lot), wake up early, use their restroom, and buy a few things on my way out.

After the necessities are taken care of (let’s be real, it’s peeing in the morning), I head to a local park to make breakfast and brush my teeth.

For this day, in particular, I was excited to get my day started as I was then heading to Flathead Lake.

Fun fact for the day, Flathead Lake is the largest natural freshwater lake west of the Mississippi (in the lower 48 states, that is). There are over 200 square miles of water and around 185 miles of shoreline! If you are interested in learning more, click here.

It was very nice to relax at this lake for a bit. I only decided to leave as when it started to heat up.

The next stop on this trip is to start heading to Seattle.

I know I’ve said this many times, but it’s been SO NICE being able to go with the flow on this trip. Sometimes it’s sad (like leaving the Tetons before I wanted), and other times it’s great to find something along the way I didn’t plan.

For example, I decided to take my friend’s suggestion and stop at the Wild Horse Hot Springs.

This is a pretty cool place and wasn’t very expensive. Not only that, but they offer camping spots too. And if you stay there, you get to use the tubs for free. Sadly, this time I decided not to go for a soak. Mainly because it was in the lower 90’s and the thought of jumping into a hot spring was not high on my list of things to do.

I know I’ll be back, and with my luck, it will be cooler weather.

Another stop I wanted to check out was the Wallace Stairs. If you want to read about them, click here, but it was a way for the people in the town to get to their homes. There are many hills up here, and when you see them, you understand why.

These stairs were pretty easy to find, and honestly, I thought there would be more of them. I counted 137. But, it was nice to walk around the town and take a break from driving.

SIDE NOTE: Just in case you are wondering, yes, I was considering checking out Mount Rainier, but it added many miles and drive time to this trip. I figure it will be easier for me to come back here at a later point in time. So instead, I continued onto Seattle.

Making It To The Emerald City

Honestly, I cannot remember why Seattle is called the Emerald City, but it sounded good for a subheading.

I decided to sleep at a truck stop since I got into the area later than I had planned. Sadly, I didn’t sleep great.

Question for you:
Why is it that people in large diesel trucks (in this case, an F250) feel they need to park right next to you in a parking lot?

This happened to me around 3 AM, and he left his truck running. It was loud enough to wake me up, make me open my blinds, all to find out there was nobody else around me. He could have parked anywhere in the lot but choose to park right next to me.

Okay, getting back to Seattle.

It’s always fun visiting friends (and making new ones) here. But DAMN, It Was Freaking Hot!

I was fortunate enough to stay at a friend’s house and even got in a quick nap. Then we headed out into the town.

To my surprise, we even got to the Seattle Sounders (soccer) game! How cool is that? I used to play soccer but have never been to a pro game. I know this post is about Olympic National Park, but I had to share some of my other activities along the way.

My original plan, when leaving Seattle, was to drive to Olympic National Park. It’s a bit of a drive, but I’m on a road trip after all.

That was when I was informed that a ferry just outside Seattle would cut a large section of driving to Olympic. This was an expense I didn’t plan for, and I wouldn’t say I like spending extra money if I don’t have to.

That is until I realized the amount of time and miles I would save for $20.40. I ended up doing it. And now for the big decision. Besides getting back on the road, part of this trip was to see if I could travel a month without paying for a room.

At this point, the only place I’ve paid for was to stay in a tipi, and I would say that’s pretty damn good.

But, let’s be real for a second…IT’S BEEN SO HOT.

I ultimately decided I would bite the bullet and find a place to stay.

It was easier said than done. There were only a few places that had a room available. If you remember from my other posts, it’s still been super busy with people. Add to it the heat, and I think everyone had the same idea, getting an airconditioned room.

But, I’m happy to report that I found a room. Not only that, but this gets even better. I used the points on my credit card to book the LAST room just outside Olympic National Park. Got to love that!

If you happen to be interested,
I found my Capital One that has a few different offers. Click the Image Below to find out more.

I’m sure you can guess what I did as soon as I walked into my new room. I turned the AC as low as it would go and jumped in the shower.

I later realized that the other side of the hotel had waterfront views. My view was of the parking lot, but hey, for the last minute, I couldn’t complain.

One last thing before making it to Olympic. I decided I should go out to dinner, and there was a sushi restaurant that had good reviews, so why not.

After waiting for about 15 min to be helped, I got the news of something I’ve never heard from a sushi restaurant, “We ran out of sushi.” At first, I just laughed but then realized they were serious.

So, I decided getting a burger and beer was the next best thing. Well, the next two restaurants I walked to were “Closed due to the heat.”

At this point, I was next to the ferry that will take you to Canada. And yes, I had my passport just in case, but guess what? It was still closed due to COVID. I resisted the urge to swim in Canada and instead went back to my room for a basic dinner of snacks. Wow, that was a lot of writing to tell you that I made it to Olympic National Park.

As you could imagine, Olympic was no different than the last few days, stupid hot.

Sadly, I was pretty much over being in the heat for the last few days. I was able to find some shorter walks.

But to be honest, I was really excited to go back to the AC room (with TV).

I did take longer hikes early the next day, and I will say this park is stunning.

Like the other parks I’ve been to, I only scratched the surface. There is so much to explore here, and I cannot wait to come back.

I’m currently enjoying the AC and think it’s time for me to call it today. I get to relax, watch some TV, and take my third shower (got to get them when you can, after all).

Oh, and another thing for having a hotel room, I get to fill up the Yeti with ice!

Which is something I haven’t been able to find for the last week or so. Everyone seems to be sold out of ice anywhere.

The decision to book this room has made a world of difference on this leg of my journey. I’m so glad I did it, and it was SO WORTH IT!

If you are interested in some of the things I did and where I got the ideas, click here.

By saying it was hot, I mean this part of the trip was crazy hot. I’m not one for hot weather, but this was crazy.

Between no air conditioning in Seattle to record-breaking heat, it was one for the books for sure.

I still made the best of the situation, which is another example of going with the flow.

I couldn’t help but think that I would do one thing differently if I lived on the road. That is driving to anywhere it was cooler. Sleeping in a Rav when it doesn’t get down below 75 at night is really no fun.

In any case, it was still a fun experience, and I will definitely have to revisit Olympic National Park soon. And who knows, maybe next time, the Canadian borders will be open!

Just as part of going with the flow, and if you are wondering, the next section of my trip has changed. This is not only due to the heat, but also fires are currently going on. My goal, for now, is to take Highway 101 down the coast. Not only will it be a pretty drive, but it is going to be much cooler.