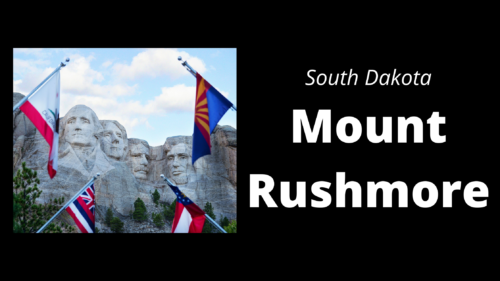 This will be a quick post to give you a quick update on my road trip.

For starters, it was so much fun being able to visit friends in Colorado. I often think only a few days are too short, but then again, I never want to overstay my welcome. I think we had a lot of fun (and drank many taste beverages).

Being back in Colorado is awesome. There are so many things to do. Not sure if I mentioned this, but I ended up going shopping. I know, I wouldn’t say I like shopping, but shopping here is different.

There is an Arc’teryx outlet store! I got a few things and am so excited…they were shut down when I was here last year (damn COVID).

Another sad thing, leaving Colorado. I’ve been here a few times over the years and have always really enjoyed it. I love how it seems the entire state is pro-military and law enforcement. This is also the first time I’m visiting that I’m no longer a cop, but it was still a lot of fun.

But, the trip must go on! Today my overall goal is to visit Mount Rushmore. I’ve never been there before, only seen photos in books and online. But, the best part, it’s on the way to Devil’s Tower, so why not stop at an amazing site?

This, I think, was my first trip to Wyoming. The downtown area is neat.

There is a cool downtown with lots of shops and things to do. I ended up getting some coffee and heading to the library.

I know what you are thinking, “Eric’s a nerd, going to the library on vacation.” But there are a few reasons for this.

The first one, if I want to get serious about this remote work thing, I need to focus on carving out time to get work done. That means going to the library when I’m on a road trip.

No, I don’t yet have a remote job, but I’m considering this blog as my remote work for now.

The better and most important reason for going to the library is that it’s much cooler than outside. Currently, it’s over 90 degrees outside, and I’m the one that doesn’t enjoy the heat.

I put an exclamation mark because I was that excited to go here.

Getting to Mount Rushmore was anything but a rush. Instead, I ended up getting stuck in road construction (again).

It was to the point where we were sitting here, and it was 103 outside, so keeping the car on was a MUST.

The four-and-a-half-hour drive turned into about six hours. That also meant that I was getting pretty tired. There wasn’t anywhere to make coffee or Mud as I had planned.

Arriving at the Mountain

I could not wait to get to the mountain. After being in the car for hours, I got antsy with excitement and the need to move around.

I planned to talk with a Ranger about the best place to park. I read that going is free, but if you park in their memorial parking, you pay $10.

I saw the fork in the road, one going to a parking garage and the other going straight. I should have gone straight, but I thought I’d talk with a ranger at the ticket gate.

News flash, there isn’t anyone there, and cars were behind me so that I couldn’t back up. So yeah, I paid the $10.

My advice, if you are going to Mount Rushmore (and don’t want to pay), find parking just before the top of the mountain or just past it. Then, if you go early or later, there should be parking available.

With that said, I know the money is going to a good cause, so it’s all good. And parking on level 5 was awesome, and I ended up being a short walk to the most amazing piece of art I’ve seen.

As I’ve mentioned, having multiple places is a must if you are doing dispersed camping.

Today was no exception.

Put nicely. Nothing was working out for me tonight. The sun was setting, and two of the places I wanted to camp at were packed. To the point where there wasn’t any parking, people were camping on top of each other.

That is not something I enjoy or am willing to do (even if there happened to be one spot left).

The first and closer one ended up having much signage that made me feel that it wasn’t a good place to camp. But then, there was one area that I liked, but the mosquitoes were insane.

I ultimately went to the further and final option. I arrived after dark, drove over five miles on a dirt and gravel road. The last mile being the most intense, but double. But, I found a location.

Overall it wasn’t the best place, but it was the best option that I had. I couldn’t find a perfectly flat place, so I parked on the road (see image above). There were a ton of fly bugs out, but I was able to get situated.

The crazy part, I actually had an awesome night’s sleep.

Upon waking up, I made coffee and relaxed. I planned on cleaning up the Rav, but the flying bugs, flies, and bees were out with force. So I ended up continuing my adventure.

I know I have mentioned this, but it’s nice having so much flexibility and freedom on this trip. If I don’t like a place, I can move on.

Additionally, the Rav can pretty much blend in everywhere. So I can stay out in the middle of nowhere, assuming I have the clearance to get there, or in a parking lot with nobody looking at me twice.

Speaking of the Rav, it’s been holding up great. Before leaving Colorado, I stopped by Les Schwab to have them look at my tires. My buddy noticed they were looking a little bald (jokes, I know), but I was told they should be good for the summer. So that means I’ll be getting new tires soon (maybe in Oregon because of tax).

The Rav has been such a great vehicle, and I’m so happy with my build. Yes, there are things I would like to do and change, but it’s all working for now. Ultimately, having cubbies or something would be ideal, but I’m not very handy.

Do you have any questions for me about my Epic Road Trip 2.0? Let me know in the comments below, and I’d love to hear from you!

We use cookies to ensure that we give you the best experience on our website. If you continue to use this site we will assume that you are happy with it.OkNoPrivacy policy