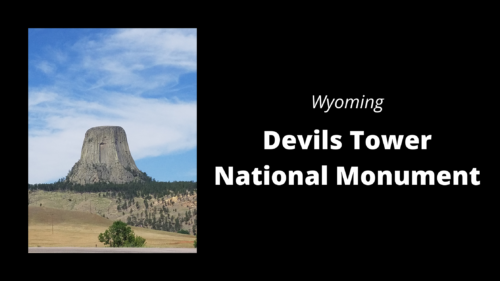 I’ve made it to Devils Tower! The best part is that I didn’t realize I would see it as soon as I did. After waking up at my camping spot, which I drove around for a while to find, dealing and battling with flies and bees, I continued on a long dirt road.

I must have been driving for many miles, but there it was as I turned one of the corners.

This is another destination I’ve wanted to see for a while now. It’s such an interesting sight to see.

I’m not a huge fan of the one thing, but I guess I understand that it’s $25 to enter the park. The National Park pass does not count.

I walked around the area but didn’t do a lot here. Again, I didn’t want to pay the fee to get in, and I wanted to try and camp next to it instead.

One thing I’m really looking forward to, maybe one day, is to rock climb the monument. It’s been a long time since I’ve done crazy climbing, but looking at this huge rock would be a lot of fun.

The cool part about that is that I know the person that owns the tipi camp (Juliana) next to the tower! If that wasn’t cool enough, it’s an amazing property that has a climbing route as well.

Before you ask, yes, I brought my climbing stuff with me, but I didn’t have enough time to squeeze in a climb. It’s also been way too long since I did any outdoor stuff, and I don’t want to do it solo.

Speaking of where I camped…this was a really cool experience. I decided to splurge a little and camp near Devil’s Tower! And it wasn’t just any camping spot, and I stayed in a TIPI!

My fascination with the tiny movement and van life is huge. I’ve stayed in many tiny houses and have enjoyed them. I’ve also stayed in a few yurts along my journies.

I’ve never stayed in a tipi and think it was a lot of fun. Not only that but there is a surprising amount of room in there.

I’m not being biased, but I truly mean this place was amazing. I mean, can you beat these views?

One of the things I pride myself on is not paying for camping. Especially when you are on a month-long road trip. I’m saving a lot of money by camping on public lands, and there are some amazing places I’ve stayed.

But, staying in a tipi, for the first time, was an expense I was willing to do!

With campgrounds being booked or costing as much as a motel, staying here was very reasonable. Not to mention you can see the tower.

If you exit the property and go right (passing the tower entrance), you will come to the town of Hulett. This is one cool little place that you have to check out.

If you clicked on the above link, you could read all about what you get and the cost. But in a nutshell:

I want to mention this is all you need, but sleeping stuff is not included. You can have them provided (pad, sheets, planet, and pillows).

The best way to think about camping at the Devils Tower Tipi Camp is that you are camping. Bring everything you need. You get the added benefit of the amazing location and sleeping in a real tipi.

Did I mention that this is an amazing property with epic views?

First of all, I slept really well. I think it had to do with being in an area larger than the Rav. I also took all my bedding, Mega mat, and pillow into the tipi.

After all, I’m self-sufficient and already had everything I needed.

After waking up and wanting to stay another night, I decided to pack up the Rav. That is when Juliana asked if I wanted to learn about tipis. That’s a no-brainer, duh!

Guess what I did, help build one of the tipis!

Apparently, one of the already built tipis was leaning to one side and needed to be fixed. It could have still been used, but as I was about to learn, having more than one person is extremely helpful when putting one of these monsters up.

The tipi we were building was one of the larger ones, a 16 footer!

There was an awful part about this experience, and I didn’t take any photos. I know I need to get better at this photo and blog thing.

Not only did I learn a lot, but Juliana even explained every piece of what we were doing and the reasons behind it. Looking back, besides taking pictures, I should have taken notes.

It was so interesting to see what all goes into setting up one of these amazing art pieces and being part of this process.

The first step was to bring it down. We did this by removing the canvas and carefully bringing down the structure. We did lose one pole. Apparently, this happens.

Next, we started by separating the three larger poles. We attached them with twine and eventually stood them up in a tri-pod.

The next part of the process was linking the other poles together. The tipi we were building was a 16,’ and it needed a minimum of 16 poles. These poles, by the way, are huge! Much longer than 16′.

The structure was impressively strong. It easily supported my weight climbing up the poles, not that I did this.

After getting the skeleton tipi erected, it was time to put it on the canvas. This was a bit tricky because the wind decided to start. But, we managed to get the canvas wrapped around. You pin it together with cherry wood (I think).

It is so amazing that everything is done with wood, canvas, and a few ropes.

After all that was done, we started to stake in the bottom of the tipi. Again, this was not done with metal tent stakes. Nope, we used wooden stakes.

The coolest thing is that you could hear a drum sound as we were getting to the end each time you hit one of the wooden stakes. This happens because the canvas is pulled tight, like a drum (who would have thought).

This was such an awesome experience, good company, and not to mention amazing views. Did I mention I watched the sunset behind the tower? The view itself is worth staying at this tipi camp (I’m just saying). Knowing a local is always a good thing.

This is also why I enjoy staying at AirBnB during my travels. There are so many things you can find out from locals.

This trip was no different. I was excited to learn that there was a really nice steakhouse just down the road.

We ended up going. It was fun to see the small town you drive past to get to the golf course, which was beautiful, and I even had the pleasure of meeting the owner.

I highly suggest checking out the town and going to Club 77 if you are in the area. They have amazing views, an awesome bar, and delicious food. I got the bison burger with sweet potatoes fries, and it was amazing!

You definitely need to check this out. You will not be disappointed.

The Next Phase Of This Road Trip

I really wanted to stay another night or two, but I had to continue with my trip.

As I was leaving Devils Tower, I realized something. I believe I’m around the halfway point of this road trip. I’ve gone as far east as I’ve planed and will be slowly making my way back west.

It’s bittersweet, but there is one thing I’m looking forward to, cooler weather.

Fun side note (written after I was going to “Cooler Weather”), yeah that didn’t happen. Instead, I got to experience record-setting temperatures in Seattle! That was fun…NOT!

There are still a few plans that I have. Two of which are meeting a few people I’ve been following on social media for years. But, we will see how it goes as things happen.

The crazy part about the last sentence and this one. I just found out one of the things I was looking forward to fell through. These things happen, but it was a bummer.

Sad News (for me)

For those of you who didn’t know, I’m really into the tiny movement and van life over the last few years. There are a few people that I follow religiously, and I hoped to meet one of them. I’ve mentioned his book, videos, and other things on this blog a few times.

So that will not be working out this time, as Tristan is traveling to Nevada and California. Funny how these things happen. I’m in his neck of the woods, and he is going to where I am.

Oh well, life happens, and we will make it happen at some point.

Maybe this is a sign that I need to get a better setup in my own Rav. I have a few ideas but am not a very handy person, so if you are interested in helping me build a new platform and cubbies for the Rav, let me know.

It’s nice to be able to check off Devil’s Tower on my bucket list. As an added benefit, I got to check off sleeping in a tipi too!

I’ve learned that you need to go with the flow, especially on a road trip. Being a type-A personality, this can be a struggle at times. But, as I mentioned the heat above, you have no choice while on the road. It’s one thing to watch YouTube and read other people’s experiences, and it’s something different when you are doing it yourself.

With that said, there are some places that I would love to stay longer, but the journey must continue. I will be stopping along the way because it’s a very long drive, but my next destination is the Grand Tetons!

This is very exciting, and I’m expecting some amazing things over there. So let’s go!