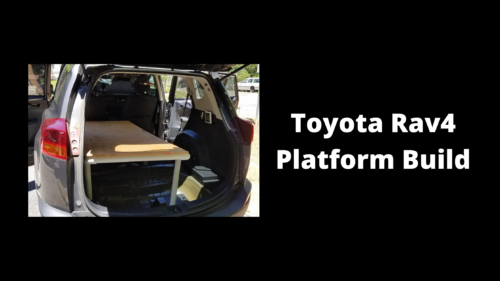 You read that right, and I made a platform for my car! Continue reading if you are interested in how I did it!

This was initially mentioned in my post on my quest for minimalist living.

If you didn’t already know, I’m not very handy with tools. Then one night, I got the idea to build it out of PCV. This build was relatively quick, and if I can do it, so can you.

Yes, there are still many needed improvements, but it’s a start. I am currently on the road and am testing it out. If you have any additional questions or suggestions, please leave a comment below. I will respond to every comment and email!

I will also let you know that I didn’t even come close to spending $200 on this entire build. If you are interested in a break down, I am willing to share it, but just know you can do it for less than $200.

Let’s start with the supplies and tools you will need. Just to point out, I already have an electric screwdriver. I only used it to attach the plywood to the PVC. Another option was to tie the two together, but I didn’t have enough cord.

Last but not least, a great attitude. You might mess up, but it’s part of the process.

I like having a goal in mind when doing a project like this. For me, the platform would not only allow me to sleep on a flat surface but provide some much-needed storage as well.

Now, let’s get to the good stuff. I started this process with a simple plan. The next thing was to remove the seat from my Rav, buy the supplies I needed, then put it all together. I also wanted to accomplish all this in an afternoon.

Clean Out The Location

The main reason I am doing this build is that when the seats are folded down, they are not flat. There are vehicles out there that give you a flat surface, and that is amazing, but that’s not the case with the Rav.

I decided that I would remove the rear seats. I was surprised this was a pretty straightforward process. I also removed the spare tire holder and everything else I could.

Side note: I did relocate my spare tire to the top of my car. I have a roof rack complete with a basket. After completing this, I was surprised at how much room I had to work with.

I have had my Rav for many years, and so you can imagine all the stuff I found under my seats. The next thing I did will make my mum so proud because I then vacuumed out the back of the car.

Honestly, I didn’t want to take the time, but I was happy to have a clean area to work with.

My next step was to measure the size of the platform that I needed. I used my sleeping pad, an Exped Megamat, to get my size. Armed with this number, I knew that I needed two cuts to the soon to be purchased plywood. This also gave me an estimate of how much PVC pipe I needed to buy (spoiler alert, I still had to buy more).

Off To The Hardware Store

My first task was to make sure the store had PVC on hand and, more importantly, a cutting tool (if you need to cut PVC do yourself a favor and get a cutting tool). These have a jaw that holds the PVC and then a ratchet system that quickly cuts the pipe in no time. I then made sure the guys in the yard would be able to make the two cuts I needed for the plywood.

Taking the list from above, I started piecing everything together. I didn’t know what all the PVC connectors were called, but I soon learned what they had and what I need to make my platform. I ended up purchasing:

At the hardware store, the guys made the two cuts I needed. After making my other purchases, I headed to the yard and did a quick test fit of the plywood. I was excited to see that the plywood fit perfectly, and I could not be happier.

Before I head to the essential part of the build, set up the PVC, I want to add something here. The plywood I purchased was not treated in any way. If I did this again, I would spend a little more to get pretreated stuff.

So, later on, I tried to find a way to seal the plywood. There are a lot of options out there, and I didn’t know what to do. It wasn’t until a friend suggested Plasti Dip. I got two cans of the spray paint version, and it worked great. I also like that it adds some tackiness on the wood so that nothing will slide off of it.

Something else I learned, I should have gotten something to prime the wood first. I think the wood soaked up most of the Plasti Dip. My thought is if I had primed the wood, I would not have needed as much Plasti Dip. Now the easy parts were over. I had my seats out, plywood sitting on the ground, and a bunch of PVC connectors. I used plywood as my primary guide. Put the “T’s” and “elbows” situated on the wood to make sure I had enough supplies.

I made my first cut to the PVC. This is where my new cutting tool came in so handy. It was easy to do and sort of fun. The best part was that I wasn’t covered in PVC from the saw. Not only did it make the process a lot easier, but the time saved was worth the cost. There were a lot of little cuts, so this tool was a game-changer.

But, even with this excellent cutting tool, I noticed some of my cuts were not the size I needed. This was when I got a marker. This allowed me to make a mark at the precise location I needed.

It wasn’t long until I realized I didn’t have enough connectors or PVC. After looking at my creation, I decided I wanted to add two legs to the middle of the platform. This would make it a lot more stable.

So, back to the hardware store to get supplies. Oh well, this is the first platform I’ve built.

After getting back home, I completed my build. The hardest part was making sure all the legs were even with the floor of the vehicle. I now had six legs instead of four. Not only that, but all the legs also need to be different sizes.

Overall I am pleased with my platform build. I did have to make a few adjustments, but it was easy to do.

The best part was after getting the PVC sections built, and inside the Rav, I put the plywood on top. I did have to make a few additional adjustments, but it all worked and fit together! This was something that I think is important to do. Make sure that you put your platform where you want it. After you use the glue, there is no going back. Yes, you can cut sections apart and rebuild, but I didn’t want to do that. I am glad that I did this, I ended up making some significant changes, and it was easy to do.

I also decided that driving around and making sure it will work for my daily life was another excellent idea. During the next few days, I realized that I didn’t like where it was located.

For starters, I didn’t take into account, my center counsel. I was not able to open it, which I noticed very quickly. That was a real pain because I realized how often I go in there. This was easily fixed by cutting two pieces of pipe, and now I can easily open my center counsel.

The next thing I noticed was I didn’t like the location of the platform inside the Rav. I had the platform behind my driver seat. This was a pain because I didn’t have anywhere to store things in my daily life. I had to put everything on my passenger seat or in the far back of the Rav. For me, this was not a good thing, so I ended up switching the platform to the passenger side.

One night, I decided to switch the platform behind my passenger seat. I initially didn’t do this because I thought having a cooler and other gear on the passenger side would be better mainly because it’s away from traffic. But I soon realized nope. I do not plan on taking the platform out, so convenience will win for me every time.

I will also note here that switching the sides was not as easy as I thought. The back of my vehicle is not flat at all, and I had to make a few adjustments and replace a few sections of pipe to make it fit. After about an hour, I officially had the platform moved.

I again decided to leave the set up before doing anything else. After two days, I knew this was the set up for me. I made some other discoveries during this time as well.

If you don’t glue PVC, it will separate while driving. Case and point, during one of my long drives to work, I heard a ton of rattling. Enough to make me pull over to see what was going on. I saw three sections completely separated.

That night, I took apart the entire platform and glued the PVC together in two sections. I did this so I can easily remove and store it at any time if I need to. I have not had the two sections separate, but if they do, I plan on adding a dowel or pin. It has been a few weeks, and I am so happy with this build. Completing this has given me a ton of motivation to continue my Rav conversion. I messed up a few times, but they were easy fixes, and I was still able to get the whole thing done pretty fast.

Knowing that this is a work in progress has helped me understand what I like and want in a van build. Making adjustments that fit your lifestyle is what this process is all about.

This reminds me, another thing was that I added some material under the plywood to help it from rubbing against the PVC. This stopped all the annoying rattles and noises coming from the build.

Thank you for taking the time to read about my PVC platform build. I am interested in what you think about it and even better, do you have any suggestions? I would love to hear about all of it in the comments below.

If you have done any sort of vehicle conversion, I would be thrilled if you would share it. We all have read or heard about someone doing a conversion of some kind to their vehicles. It’s all about taking that first step and seeing what happens.

We use cookies to ensure that we give you the best experience on our website. If you continue to use this site we will assume that you are happy with it.OkNoPrivacy policy